Goliad is the third oldest municipality and is rich in Texas history. It is the County Seat of Goliad County, one of the oldest counties of Texas.


First named Santa Doretea by the Spaniards in the 16th century, its name was changed February 4, 1829 to Goliad. The name is an anagram derived from the last name of a Spanish missionary priest, Father Hidalgo. 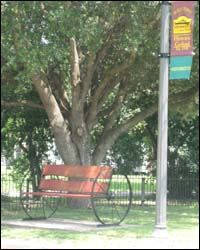 
Nine flags of different nations have flown over the Presidio. One of its historical backgrounds is being the place where the first Declaration of Texas Independence was signed on December 20, 1835. The saddest page of Texas history, the Goliad Massacre, which was the largest single loss of life in the cause of Texas Independence occurred here. This event inspired the battle cry "Remember Goliad," at the battle of San Jacinto.

Following the Texas Revolution of 1836, General Sam Houston, then the Governor of the Republic of Texas, granted four leagues of land to Goliad on October 25, 1844. Goliad is the smallest town in Texas to be selected for the Main Street Program in 1984 and the Courthouse Square Historic District is one of the most complete examples of early Texas Settlements.


The town centers around the Goliad County Courthouse, erected in 1894. Goliad's courthouse, along with the 19th and early 20th century structures surrounding it was entered on the National Register of Historic Places in 1976. The second empire style courthouse was designed by noted Texas architect Alfred Giles and was completed in 1894. Limestone was used in the construction and was hauled from Austin by oxcart. It was enlarged and restored in 1964 and is a recorded Texas Historic Landmark.


On the north courthouse lawn there is a tree called "The Hanging Tree." At various times between 1846 and 1870, this tree served as the site of court sessions. Death sentences pronounced by the court were carried out immediately with a rope and a strong limb. During the 1857 Cart War, in which Texan freighters perpetrated a series of vicious attacks against Mexican cart drivers along the Indianola-Goliad-San Antonio Road, this site witnessed a number of unauthorized lynchings before the conflict was brought to an end by Texas rangers. Approximately 70 men lost their lives during the conflict, some of them on this tree.


The Goliad State Park has a place to camp and fish. There are even trails to take a nature hike. Cinco de Mayo is also a big event that is celebrated every year.


Both a state park and international historic site, reconstructed birthplace and statue of one of Mexico's most famous military figures, General Ignacio Zaragoza (1829-1862), born in Goliad. The Mexican general and liberal leader was minister of war under Juarez. In 1862 he commanded an outnumbered and poorly equipped Mexican army in defense of the Central Mexico city of Puebla against elite French forces. Zaragoza flung back the attacking army, inflicting heavy losses and forcing its withdrawal to the east coast. It is not generally known that this French army had proposed to march into Texas to establish aid and a supply line to Confederate forces. The battle date, Cinco de Mayo (May 5), is a national holiday throughout Mexico, and is celebrated in Goliad and in several Texas cities. In 1992, Goliad was named the State of Texas Official Celebration Site for Cinco de Mayo.

Goliad is a great historical place to visit with many attractions. The town is very quiet, but there are many people who have a lot of stories to talk about. There are many interesting shops, museums, and parks to tour.

Notify Me® automated
notification sign up
Report a Concern